EVE: How to lose a carrier.

Yesterday evening I was once again made aware of the fact that multiboxing and complacent behaviour will be punished sooner rather than later. 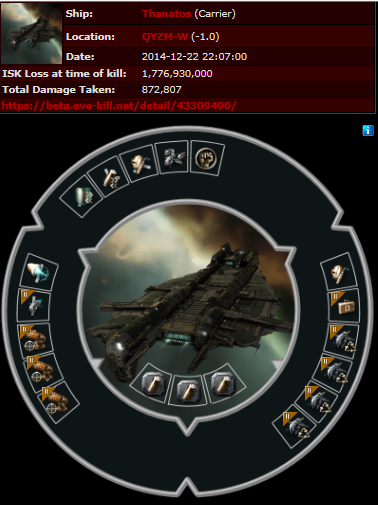 As this was my first day of vacation I had been online all day ratting with my Thanatos.

My initial setup was having a thanatos, rapier and vexor navy issue on grid but by the time the hotdrop occured I had changed from having all my ships on the same grid to three ships in three different locations, thus lowering my awareness and response time.

My shiny new thanatos was happily killing rats.
A noctis was cleaning up cleared sites.
A retriever was mining away in an anomaly.

My attention thus divided between three clients I was not paying enought attention to intel and local channels. At the same time I noticed Seterinthia was back in local I also managed to read the all-important line in chat which mention she had not left system earlier but logged off.

Moments later she appeared on grid.
Since I assumed I was not going to warp off in time I dropped a mobile depot (my custom had been to align to a safe at 75% speed except for today because I had changed tactics and been dropping MTU's)

But either the mobile depot was killed by the bombers before it even came online or it wasn't visible on the overview (imported earlier that week from corp chat but I hadn't verified what was showing and what was hidden).
In any case I was unable to refit to WCS or tank. Shields were already gone to rats so the bombers only had to melt through armor/hull of my completely untanked carrier. (Guess what, earlier that day I had replaced a trimark armor pump with a capacitor control circuit because everyone knows cap is the most important thing in Eve, not that it would have mattered much.)

Maybe if I had an alt ready next door that I could have cyno-ed out in time before getting pointed?
I had full fuel bays and also had a cyno fitted to bring in reinforcements but without tank there was no time to even think clearly about the options left to me.

So after all hostiles were on grid and shooting at me I offered a GF in local since I knew there was nothing I could do to prevent my demise. I had hoped my gecko's would kill at least some hostiles but they only managed to kill the single prospect that tackled me.
It didn't help that my drones were just killing off the last rat of the wave as the hostile appeared spawning three frigates that assisted the hostiles in tackling me. The rats did manage to kill two bombers so they were more effective as I had been in defending me.
Carrier has been replaced already, had this happened in the morning I would have been royally pissed off but by the time I was tackled I think the carrier just about paid for itself.
Although this will delay buying a second carrier...

For comparison, my previous loss to hostiles killing my ratting ship was in january were I lost a harbinger https://eve-kill.net/?a=kill_detail&kll_id=21317874 (yes that was a pve ratting fit).

Posted by Raziel Walker at 1:29 PM