What I really wanted to do was roll a FW plex alt with less as 100k SP capable of flying a quadruple fit WCS frigate but thanks to some people in EVEOGANDA I decided to try out incursions first.

So yesterday evening I joined chat channel 'The Valhalla Project', asked some questions and was convoed by a helpful person who gave me some advice on using a basilisk. After downtime today I made sure I was in the staging system and ready to X up if and when the FC asked for logistics. 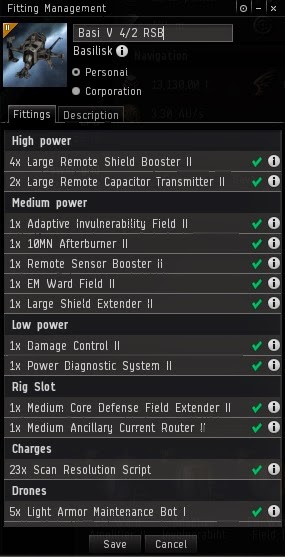 An hour or so later I was invited to fleet and in warp to my first incursion site.

After the first site was done I quickly entered into a routine. I'd align on the acceleration gate and the second I saw the first person enter warp I'd follow. After landing I'd lock up that person for shield reps, my cap buddy for cap transfer, the drone bunny for the remote sensor booster and I would start orbiting the anchor.

After that it was just a matter of paying attention to broadcasts for shields and reps. I was targeted by rats a few times myself but never in any danger even when webbed by half a dozen frigates. We didn't lose any ships during the time I was in fleet but one Machariel hit structure and two other ships hit armor so you still have to pay close attention to what is going on.

I stayed in fleet for 3,5 hours and earned 14 ticks of 31,5m isk each. So 441 million total or 126m isk per hour. I think this is the best and safest income source I've seen so far. I did have to wait an hour to get into fleet but I was active on another account during that time.
Posted by Raziel Walker at 7:37 PM